The Railway & Canal Historical Society has organised, jointly with the Centre for Institutions & Economic History, University of Reading, a day-long Workshop on Freight Transport History. It will be at the University from 10.00 to 16.30.

The speakers are expected to be: 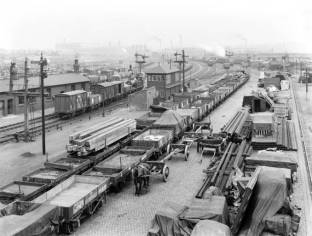 • Nigel Sheppard, ‘War surplus lorries – is it a case of a bus at the South Pole?’.

• Grahame Boyes, ‘From BOTTOMS to TOPS: the impact of the computer on the development of British Railways’ freight business’.

• Peter Brown, ‘Some thoughts on competition between canals and other transport modes in the 19th century, based on the experiences of the Shropshire Union Canal and its predecessors’.

• Jorgen Burchardt, ‘The transition from rail to road in the Danish cooperative retail chain FDB, 1945-1980’.

There is no charge for the workshop, but attendance will be limited to 60, and it will be widely advertised. Booking is essential, and a reserve list will be in place.

Bookings to Fabian Hiscock, by e-mail to fabianhiscock@virginmedia.com or by post to him at 101 Byewaters, Watford WD18 8WH, by 4 Nov 2017.