The mobility of ‘Family Ale’: Whitbread’s bottling and sending of beer before 1892

Whitbread proudly proclaimed by the early twentieth century that it was the world’s largest bottler of beer. The figures certainly demonstrate that this was so, it putting 353,936 barrels Pale Ale, Stout, Extra Ale, and the interestingly named ‘Family Ale’ (amongst others) into bottles in 1910. It had also opened up network of bottling stores and depots to supply demand, the number reaching 38 in that year.[1]

Forty years earlier the situation had been very different. In 1870 it had put only 1,293 barrels of beer into bottles (372,384 pints, for those keeping count). The first bottling occurred in 1868 at 26 Worship Street, Finsbury Square and then a more permanent residence was taken up in 1870 at 277 Grays in Road. In both instances the company’s agent, Robert Baker, was in charge.[3] However, no more bottling stores or depots were opened until 1891.

The question that has vexed me is why was this so, and what role did the cost and accessibility of transport play in this? This line of enquiry also speaks to broader questions about how transport networks, access to them, and the cost of using them, can render freight mobile or immobile, and business activity stymied (similar issues can be considered when thinking about human mobility). Redman, the company’s archivist, argued that whilst Whitehead executives may have envisioned further mobility for their beer beyond London and market expansion, it was limited by the blocking force of excessively high railway rates before 1892, when the brewer made a ‘deal’ with the railway industry.[3] 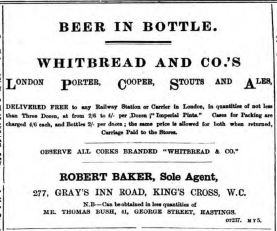 I have always been sceptical about this claim on a number of counts. It is rare that companies would make a deal with the whole railway industry, and indeed, later Whitbread dealt with railways on a case by case basis.[4] Also, whilst consumption of bottled beer grew steadily after 1870, because of high prices demand was never too high until the 1890s, suggesting that there was no need to transport huge volumes of beer before then.[5] This is despite Whitbread’s bottled beer becoming cheaper over the period, the cost then stabilising before 1889. In 1870 a dozen bottles (pints) were retailing in Bury St. Edmunds at 5 shillings, but by 1889 in Hastings London Cooper and Family Ale cost 2 shillings 6 pence, Stout and Pale Ale were selling at 3 shillings.[6] This suggests that price was not the only determinant of demand and drinking habits needed to change before bottled beer became popular. But most significantly, before 1892 the brewery could absorb transport costs into the price of bottled beer with ease, even if the margins on each bottle shrank.

Indicative of this, before 1892 the company was utilising the railway network to send beer nationwide and grow its share of the market. Redman himself acknowledged that customers in Leeds ‘received their beer in heavy closed three dozen cases sent up on the railways.'[7] After trawling through nineteenth century adverts it also appears outlets were selling Whitbread’s product in Newcastle, Bury St Edmund’s, Leamington, Bedford, Dundee, Sheffield, Chesterfield, Bath and Herne Bay, amongst other places.[8] The final nail in the coffin was a note on an advert from 1877 (shown) which stated that beer was ‘Delivered free to any Railway Station or Carrier in London, in quantities of not less that Three Dozen, at from 2/6 to 4/- per Dozen.'[9] Whitbread was therefore offering to send its beer anywhere in Britain, an offer which resulted in the bottling operation growing 38,782 barrels being put into bottles in 1890.[9]

What is therefore likley is that railway rates were not a huge limit on Whitbread’s bottled beer operation expanding before 1892. Rather, changes thereafter were possibly the result of an intersection between individuals’ spending power rising, shifting habits towards home drinking and, in response, a change in Whitbread’s corporate strategy, the result of it converting to a limited company in 1892 and needing to service its capital. Although, naturally, further research may reveal more, and other ideas might come to mind.

This research is part of my ‘brewing and railways’ project funded by the Business Archives Council’s bursary for business history research. For more information see here.

If you are interested in learning more about British railway history, perhaps you want to study the University of York, Centre for Lifelong Learning’s online Postgraduate Diploma in Railway Studies, which I teach. How the railways changed goods transportation in Britain is covered in module 1 (The coming of the railways to Britain, 1830-1900) and the railway rates issue is covered in module 2 (The declining profitability of the British railway industry, 1870-1914). More information on the course can be found here. 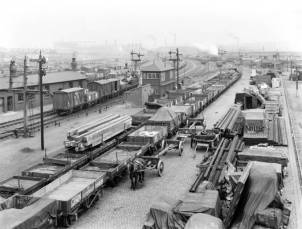 Offers of 30-minute papers are invited for a freight transport workshop organised jointly by the University of Reading’s Centre for Institutions & Economic History and the Railway & Canal Historical Society, to be held at the University on 24th November 2017. Programme organisers: Grahame Boyes, Colin Divall and Mark Casson.

The aim is for a mix of papers by academic and amateur historians, which will illustrate the potential benefits of greater dialogue between the two. Preference may be given to papers which treat themes or topics not already covered by the symposium held in Reading during April 2015, From Carrying to Logistics: Distributing Goods in Britain, 1680-2015. (details found here: blogs.reading.ac.uk/economic-history/2015/04/17/from-carrying-to-logistics-distributing-goods-in-britain-1680-2045/)

The closing date for submission of a written proposal is 16th June (up to 200 words). Please send your abstract to Grahame Boyes (g.boyes1@btinternet.com).

Railway rates and roads: mass goods mobility by road as an envisaged reality in 1893

As part of my ‘brewing and railways’ project, I have been musing on when Britain’s businesses started thinking seriously about the possibilities of long-distance goods haulage by road, and what this could offer them them in terms of improving the flexibility and reducing the cost of distribution. I keep coming back to the 1 January 1893, probably one of the most important, but largely forgotten dates in railway history.

Most railways had their maximum rates for different categories of goods set by their authorising Acts of Parliament. But in a quest to beat competition, they ordinarily charged businesses ‘special’ or ‘exceptional’ rates below these, arranged on a case by case basis. Despite this, traders were not happy with the regime, and in response in 1888 the government ordered all rates be revised by the Board of Trade, with the new schedule to come into effect on 1 January 1893. No one expected what happened next. On that day the railways put all rates up to the maxima nationwide, eliminating all the special rates. There is an argument that this was a result of their inability to revise the millions of special rates by the deadline, but Cain characterised the action as an act of ‘shortsighted greed and clumsy diplomacy.’ The new scheme would have reduced some rates, and profits, and the companies were looking to reimburse themselves for these losses.[1]

Businesses everywhere hit hard. At a meeting of the trading community of Tamworth on 28 January 1893, those in attendance recorded that on average transport costs had risen by 35 to 40 per cent. There were also extreme cases, a Mr Chappel stating that moving a ton of tin plates had risen from 6s 8d to 19s 10d (although he did not say to and from where).[2] The brewers of Burton were also affected. Previously, distributing beer by rail nationwide had cost them £562,000 annually, yet the new rates added £82,000, an increase of 14.59 per cent.[3]

Soon after, the railways realised their misstep and as was reported at Tamworth, and in the case of the brewing industry, they restored many of the old rates. But there were broader implications beyond the short-term dent in the railways’ public image. With the railways being perceived as monopolistic, greedy and arrogant, the business community seriously began exploring new systems of goods mobility that would release them from their dependence on rail. At a meeting of commercial interests in Portsmouth on 7 January, it was suggested that they come together “with a view to the formation of companies to…render us independent of the railways.”[4] Where coastal shipping was available, traders availed themselves of this. Other solutions were proposed. Sir James Whithead, a merchant and Liberal MP, introduced a private members’ bill to nationalise the canals so that the common need for cheap bulk goods transit would be met.[5]

Significantly, the discourse also extended beyond simply thinking about appropriating long-established forms of transport. After 1 January 1893 there was, possibly, a perceptible shift in the business community away from simply hoping the railways could do better, towards envisioning a new reality where they delivered long-distance goods transport by road.

Most businesses used horse and cart over short distances, but this was not practicable over longer runs. Some therefore began thinking about the potential of steam traction engines, that up until that point had principally powered farm equipment, but had occasionally been used for road haulage. These vehicles’ percieved future potential as a means of long-distance haulage is suggested through the lack of reference in discussions to any spacial restrictions on their range of movement. At the Portsmouth meeting it was argued that “The employment of traction engines passing through the villages along which their lines run would undoubtedly prove a very serious matter for…Railway Companies.”[6] The traders in Chelmsford considered organising a system of road transport to take goods the 30 miles to London using steam traction.[7] Finally, as a direct response to railway rates increases, Eddison & De Mattos Steam-Plough Works of Dorchester advertised haulage services, most importantly carrying goods ‘to any extent and any distance on lowest terms’.[8]

At this point there were many problems that the traction engine had to overcome to become viable as a means of mass goods haulage (as we know it never did, the internal combustion engine rising to dominance). Whether Eddison and De Mattos could actually deliver anywhere is doubtful, given the poor quality and reliability of many traction engines.[9] They were also beasts, and perhaps rightfully elicited negative reaction. A letter writer to South Buckinghamshire Standard stated that they had been a “source of terror and alarm to all those within 100 feet of the road.”[10] Road surfaces were poor, and where they were not there were frequent complaints about the excessive damage traction engines did.[11] Their speed was also restricted to 4 miles per hour (2 in urban areas) by the Locomotive Act of 1865, also limiting their rage. [12]

Nonetheless, these limiting factors were seemingly absent from the discussions surrounding the future possibility of unrestricted long-haul goods mobility by road, with the quotes above suggesting a more positive outlook. Combined with numerous cases of businesses starting to use steam traction engines for haulage after 1 January 1893 ,[13] it can therefore be suggested that at this time many began seriously entertaining the idea that a more flexible long-distance system of road-based goods mobility could be instituted. It is perhaps ironic that this thinking, which snowballed from then-on and may have driven the technical and conceptual development of motor haulage by road, was kick-started by the railways’ actions.

N.B. These are some formative ideas and I need to do much more research and gather more evidence on this subject.

This research comes out of my ‘brewing and railways’ project funded by the Business Archives Council’s bursary for business history research. For more information see here.

If you are interested in learning more about British railway history, perhaps you want to study the University of York, Centre for Lifelong Learning’s online Postgraduate Diploma in Railway Studies, which I teach. How the railways changed goods transportation in Britain is covered in module 1 (The coming of the railways to Britain, 1830-1900) and the railway rates issue is covered in module 2 (The declining profitability of the British railway industry, 1870-1914). More information on the course can be found here.